The War of Ashes playtest is now open! Go apply for it!

What is War of Ashes? Is that what you're asking? Well, it's based on Zombiesmith's wargame Shieldwall, in which four varieties of puppety oddballs cut a bloody swath of death and conquest across the island of Agaptus. Zombiesmith makes some detailed, distinctive miniatures for it in their trademark "grimsical" style. They're kinda like Muppets, but even more bloodthirsty, if you can imagine such a thing. It also has an impressively rich backstory, which WoA lead designer Sophie Lagacé has used to create a whole RPG using Fate Accelerated Edition. I was lucky enough to get to do the combat rules, as previously mentioned, which are minis-compatible. The design goal there was to make a FAE game that can incorporate minis and tactical combat in a way that adds to the fun instead of feeling like a barrier to it. Shieldwall has some unique cultural stuff that shows up in the game, like Roar and Froth, and figuring out how to work as much of that material in to give WoA a Shieldwall feel was a fun challenge. I'm really pleased with the results.

I get a lot of people asking me questions all the time. A lot. Mostly they want to know "Who let you in here?" But a close runner-up is "When is Atomic Robo: The Roleplaying Game coming out?"

(In all fairness, Evil Hat's last projection was spring 2014, and early June still qualifies as spring 2014, so in a way this is just confirming something you probably already know.)

In the meantime, what's going on with ARRPG these days? It's in the tail end of layout. Next is proofing, the indexing, then I dunno, maybe another round of proofing? And then off to the printer? Yeah, that sounds pretty likely.

[War of Ashes] You Got Your Minis in my FAE

So as Fred mentioned in the most recent State of the Hat, I've been brought onto the War of Ashes team to work on some minis combat rules. Of course, the inestimable Sophie Lagace is still the lead designer/developer/writer/do-everything-person. I'm just doing this one thing.

What is this one thing? Little background on my influences here: I've played a bunch of every edition of D&D, and really enjoyed the tactical element of 4E in particular. I enjoy Descent a whole bunch, and own three sets of Dungeon Command, 4E's minis skirmish-game offspring. Despite this, I wouldn't necessarily call myself a "minis guy," which is too bad, because I like minis as a physical thing, but since I mainly run Fate, I haven't found a practical use for them. (I also run a very occasional D&D game that's cycled from Rules Cyclopedia to a couple of my own heartbreakin' "fixes" to D&D Next, but my players really enjoy not having any visual aids at the table, so even that's devoid of minis.)

My starting point for WoA's -- for lack of a better term -- tactical combat is to make use of existing elements in Fate that can lend interest to incorporating minis. Zones are already a thing, of course, but admittedly, a thing I rarely use. Descent, 4E, and Dungeon Command all taught me that interesting terrain can make for interesting minis combat by making the minis and defined space feel both relevant and fun instead of a barrier. Fortunately, Fate has an existing way to handle the "interesting" part too, in the form of aspects. So I'm not interested in 5-foot squares or hexes or anything on that level of detail. A zone and an aspect are good enough for me. In fact, if you look at that picture above, each separate card in the Noteboard is its own zone, with its aspect written in. There's enough implied contrast between Open Field, River, Trees, and Clifftop to make any more detail redundant.

Forced movement, too. I love playing fighters in 4E, not just because they're good at their job without being magical (although that's a big part of it), but because it's so satisfying to push, pull, and slide badguys around. You get a real sense of battlefield control. So that's a thing here. But because we're dealing with such coarse-grained detail, as long as you're in melee there's no functional difference between pushing or sliding someone into an adjacent zone. (Pulling looks the same too, but has a different feel, IMO. I'm not sure I can tell you why, which may mean I'm wrong about the different-feel bit.) Forced movement isn't always the most useful or exciting thing to do, but when it is, it's awesome. You may not care about pushing a guy from one Open Field to another, but pushing him into a Waterfall or River or off a Clifftop is another matter. 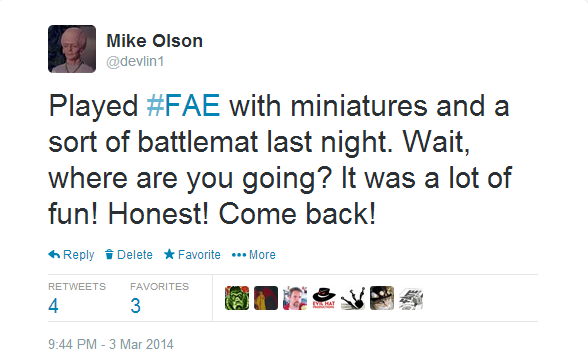 So. The aim is to add enough tactical detail to make fights more concretely realized without constraining the action, and no more. The rules need to be intuitive enough that your best guess about how something should work should do you fine and/or agree with the text. And everything still needs to play like Fate, not a tactical skirmish game that happens to use Fate dice.

To that end, I managed to press-gang some of my San Diego friends into a little playtest last weekend -- just a single combat to try out some ideas. And it was honestly a lot of fun. We worked a few things out in play that I hadn't been entirely sure about beforehand, but for the most part the stuff I came in with resulted in a good balance of Fate-style narrative and tactical play. The map and minis added fun to the fight instead of leeching it. I'm eager to try it again.

You probably want some more details on mechanical stuff. Hey, I know I would! So here's some of that.

How did this all work? In brief, really well. Not everyone in the playtest group was super into using minis, I think, but they all got into it quickly enough. The word "feel" is kinda problematic in these contexts because it's so personal (and therefore often meaningless); nonetheless, I have to say it still "felt" like Fate in spite of what amounted to additional visual aids. We got to test out all of the above rules, too. We had the ogre PC fighting four NPCs at once. They had the numerical advantage, but he managed to push one of them into the waterfall, from whence the poor NPC was promptly pushed downriver by invoking the zone aspects along the way. (He was a nameless NPC and I thought it was funny, so we went with it.) We had someone invoke the Open Field aspect as part of a charge, and someone else invoke Clifftop to dodge a thrown rock from below. Even a single point of Lethal damage proved dangerous to the PCs at the right time. For me, a hallmark of an exciting Fate combat is if the PCs are beaten up by the end of it, and as the ogre finished the scene with a full stress track and a full four conditions, I'm going to say this more than qualifies under that criterion.

Now, could we have played this combat without the minis? Absolutely, and almost nothing would've changed rules-wise. The fact is, we enjoyed the minis, which is the experience WoA is supposed to help create.
Posted by Mike Olson at 8:12 AM No comments: