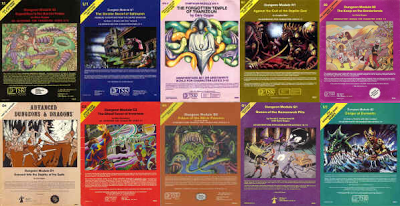 Now I will slowly go insane picking these fantasy characters apart, trying to figure out just what they're all about.

The columns on the skill pyramids are super fascinating. I'm assuming some of this will become more clear when the "Atomic Robo" release occurs?

Incidentally, this particular hack will be in the Fate Core Toolkit, so... there's that.

I've been hacking the character sheets all day long too. I would love to use FATE for fantasy more (I love LoA, but I would love a Fantasy FATE Core game), and this sheets look really intriguing.

I hope you tell us more about this hack in the future! :)

So, red and blue dice? Is that a new thing?

Good question. What is the red and blue?

Are they just bonus dice, so you end up rolling more dice like 6DF instead of 4DF?

Are they "better" dice. Eg. red can only provide a bonus, when attacking and if a negative comes up ignore. And blue dice are for defending?

Wow, they are +5 so they are high lvl. Chars already, no?
This is whats nagging me about playnig D&Dish games with FATE. You cant really start as low level going all the way to Superheros, cant you?

By default, Fate Core embraces a different paradigm than old-school D&D does. Advancement isn't nearly as big a deal. Change can happen after every session, in the sense that you can swap out an aspect or a stunt for another, but not the constant acquisition of more power, simply because Fate Core treats PCs as protagonists in a story, and that sort of thing doesn't happen a whole lot in fiction.

So these aren't "high-level" characters; they're starting characters, and about as capable as the average starting ARRPG character, magic-stuff notwithstanding.

These characters are really awesome. Would it be possible to explain how exactly you made their stunts, spells, favor and all that? I would LOVE to bring some of these ideas into my own games.