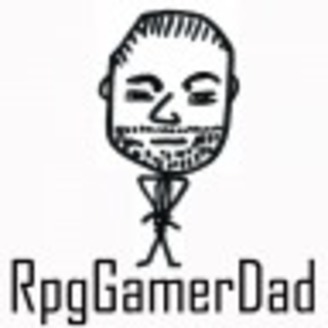 Before we get into these FAE-related ramblings, I want to let you know that I'm on the RPG Gamer Dad podcast this week, talking Atomic Robo and Fate in general. This was recorded back in... I dunno, a couple months ago, but I don't think there's anything time-sensitive in it that's since been rendered obsolete in the interim. If you like accents, that story of how I ended up involved with Atomic Robo: The Roleplaying Game, or people expressing enthusiasm, you will not want to miss it!

I've been thinking more about FAE in practical terms over the last 12 hours or so, because I realized last night that my current level of interest in Steven Universe means I'm almost certainly going to run a one-shot based on the show in the relatively near future. I know myself well enough by now to realize and embrace this. This is the inception. FAE seems a good fit.

As it happens, I'd also already planned to run another Star Wars one-shot of some kind at Gateway to complete my trifecta of "games about people in the Star Wars universe you don't usually hear much about but who could reasonably fit into established canon, such as it is, one way or another" in this, the year of the Star Wars. I've done political-activist droids with OVA and an Ewok hit squad with Mini-Six, both of which were largely disappointing system-wise (very likely because of my inexperience with those systems), so it seems natural that for this last one (Rebellion-era Imperial Academy cadets, maybe?) I should return to something I know works well and would suit the source material: FAE.

This is not a broken or weak aspect of FAE. On the contrary, it's a strong point. You feel like you're getting away with something because you're almost always adding +3 to every roll, all for the low, low cost of providing colorful descriptions of how Forceful or Flashy or Clever or whatever you're being. But it's that last bit that really matters -- making the story better. It's a trick. You want to play the big strong hero with +3 Forceful? Go ahead and do that! You should be finding Forceful solutions most of the time. It's what you're best at!

The thing is, it's implicit in this that taking one approach means you're definitely not taking any of the other five. And that may be a problem for you. Forcefully busting down that locked door means you're not doing it Carefully or Sneakily. Someone probably heard that, right? If you're Cleverly picking that lock instead, no one's going to hear you, but you're probably not getting it down Quickly, either.

Were I to formalize this systematically, I'd call this approach you're not using -- the one that, because you're not using it, is generating a complication for you -- the nemesis approach. I say the GM gets to pick your nemesis approach, both because it's a lot easier and because it just makes sense. It's the GM's job to fill your character's life with drama, so this would seem to fall under that umbrella. It doesn't need anything else number-wise, I think. It's basically just a source of inspiration for the GM and a clear message to the player that using a given approach to solve a problem may make their lives more difficult.

Furthermore! I'd say that on a success with style, you get to pick a complementary approach that applies to the task at hand. You don't get its bonus -- you just get to include that adjective (or adverb, as the case may be) in your problem-solving narrative. Succeed with style on Cleverly picking that lock, and you can do it Quickly too. So whatever other problems may come down the pike as a result of this task, they can't originate from your lack of Cleverness or Quickness. That's actually a pretty powerful thing, really.

Some time ago I made this graphic for another post on approaches: 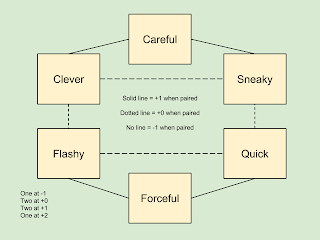 Now, I hear what you're saying, even though I have this playing in the background and also my 2-year-old is pushing a chair around the living room for some reason: "Hey, these nemesis approaches sound a lot like compels. Are these compels?" I'd say no. If you're going to use this, everyone has to be on board with the implication that using one approach means possibly suffering the consequences of not using one of the other five. Likewise, the GM needs to be on board with not making the players pay for every damn choice they make. Bring in a nemesis approach when it's interesting and dramatic, or when one player is leaning really heavily on one approach to the exclusion of the others.

That last bit might make this sound like this is meant to be punitive, but it's not! You're not punishing them for playing the character they made -- you're just telling them, "Look, your character is rad, absolutely, but you can't go through life being this one-note without creating some problems for yourself now and then." I think that's fair. The GM has to be on board with that, too. Be a rabid fan of the PCs and this shouldn't be a problem.
Posted by Mike Olson at 11:03 AM