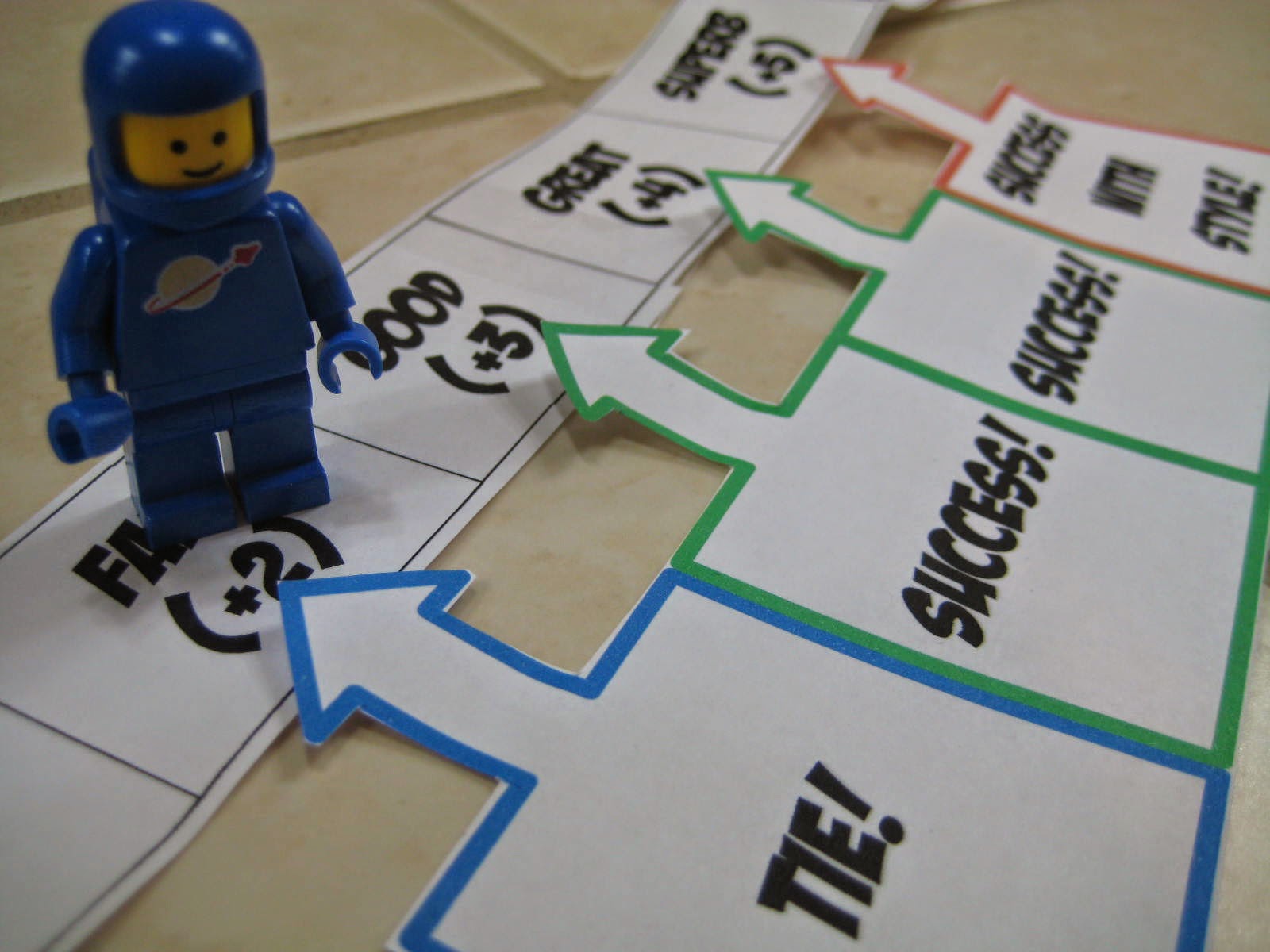 WARNING: This is long. It could be even longer. I could gleefully talk about every second of this thing, but I won't.

A while ago, a woman I know told me about how her 8th-grade daughter and 20 or so of her friends staged a freeform boffer Hunger Games LARP. They made their own weapons and made up their own rules. As it happens, they'd never heard of LARPing and just came up with this idea because it seemed fun (and I'm sure it was).

I immediately gave her a copy of Fate Accelerated and a set of four Fudge dice and said, "Here, give these to your daughter." She didn't know what roleplaying games were -- she'd heard of Dungeons & Dragons, but for a lot of people that's not really a useful touchstone -- and neither did her daughter, but I was like, "Trust me, from what I've heard, she and her friends are going to dig this."

Over the next several months, we tried on and off to figure out a time and place for me to run a game of FAE for her and whoever else was interested. Yesterday, it finally happened.

And it was the best, you guys.

We had two hours in a study room at a local library in Murrieta, so after brief introductions and my exhortation to please not call me Mr. Olson -- as weird as that may be for a kid, it's ten times as weird to be called "Mister" anything when you're running a game -- I briefly explained the general idea of a roleplaying game. Y'know, each of you is going to make and take the part of a character in a story, and I play everyone else and the world, and you tell me what you want to do and I tell you what happens and if we disagree we roll dice. That stuff.

My first inkling that I had nothing to worry about on that front came when one of the four girls admitted she didn't even know what we were doing that day, but assumed it was going to be acting or improv. Good start.

I didn't have anything prepared in advance, other than printing off some character sheets and the success-track thing shown up top. I was going to let them tell me what genre they wanted, what premise they wanted, and anything else, then go with it. I'm not used to running games totally off-the-cuff like that, but it seemed like the best way to kick things off.

Despite being smart, creative types, they kinda froze when presented with that much responsibility. So I suggested capital-F Fantasy, because it was a genre that we were all generally familiar with. So, good. Magic and swords and elves and all that jazz. I can do that in my sleep. I probably do and don't even know it. They're in a small but busy trading town at the intersection of three roads called Three Crossings. I use that name all the time. Probably in my sleep too.

I'd brought a Deck of Fate with me, so I took out the Accelerated arcana and had each player pick one. This would be their +3 approach. They loved this idea. I can empathize -- when presented with all that possibility, getting even a single anchor point can be a godsend. They pulled Careful, Clever, Forceful, and Sneaky. These also served as sorta proto-high concepts; I could see them starting to wrap character ideas around them.

Then I helped them come up with high concepts and troubles, and we got some good ones. They kept their sheets (yay!), but here are a few I can remember:

The characters:
So me, sitting there listening to them start to form their characters, I already I like where this is going. There's plenty of variation in character types, and it's easy enough to say they're childhood friends who hang out and have adventures, and I'm getting ideas for what we might do for the next 90 minutes.

It was around here when they started saying "This is so fun!" They're not even playing yet.

Because this was their first time playing anything like this, they didn't bring any gamer-baggage to the table. This included, but was not limited to, second-guessing my every move. Nothing would be cliche to them! So I started things out in a tavern.

"What's the name of this tavern?" I asked.
"The Cave!" one of them immediately shot back.

Great! There's a big tree in the middle of town, a huge tree, a tree so enormous a lot of the town is built into its above-ground roots. That's where the Cave is, so-called because it's in a "cave" of roots. They look at each other and murmur approvingly. (Why this town isn't called Tree Town, I really don't know.)

There's a kefuffle outside! I compel Fang's high concept to need to be the leader-type and go check it out, alone. Fang eagerly accepts the fate point. (They instantly grasped the idea of getting into trouble now to earn later awesomeness.)

"Descending on lines from the tree above--"
"Oh, don't say spiders," Rachel's player said.
"Why, do you not like spiders?"
"No."
"They won't be real spiders."
"Okay."
"They'll just have, like, six legs."
"That's what I don't like about them -- eight legs."
Hm. I wasn't even going to do spiders before she spoke up, but now I'm all about it. "What about seven legs? Better or worse?"
"Meh."
"Nine?"
"[audible disgust]"
"Okay, so these nine-legged metallic things are descending on lines from the tree...."

Whatever these things were, they were capturing townsfolk by shooting out an entangling line of some kind and imprisoning them inside their weird metal bodies. I'd intended a short fight just to show them how things worked, but it ended up being a chance for the players to really figure out who their characters were. By the time they'd taken care of these three not-spider-things, we'd discovered the following:
It's quickly becoming clear that these aren't just four adventurers who merely hang around in the Cave and drink some sort of tree-sap beverage. These are the Heroes of Three Crossings. Nobody messes with this town when choker-hair, TARDIS-cloak, metal-wings, and the never-ending thread pocket are around.

There was a great moment -- in a sea of great moments, really -- when Ash tried to get all the townsfolk to safety, and failed. Because Ash's player knows the value of complications in a story, she chose to succeed at a serious cost. So while everyone's running for the safety of the big tree, one of these nonapods shoots its entangling line at her, misses, and reels in a fleeing kid instead. CLANK! Its metal carapace slams shut with the kid inside.

This scene also featured Fang grappling a nonapod with her hair and forcibly tearing it to pieces to free an old woman trapped inside. These people are lucky Fang's on their side.

So they take care of these things, and then decide to go up the tree and see what's going on. Earlier I'd said something about a complex ecology in its branches, but implied it was all weirdo fantasy animals, not metallic not-spider things. This is when Rachel's player's mom showed up and she had to leave, but at least Rachel has a plausible exit from the story for the time being in the form of her energy cloak.

Ash flies up the tree. Fang uses her prehensile hair like Spider-Man. The Fool unravels his thread and forms it into a rope, which he throws high into the air. It latches onto nothing, and he climbs up, then does it again, and again and again until he's up in the branches. This has become the Fool's shtick: He breaks reality.

They get up there and because we're running out of time and I don't know when we'll get to play again anyway, there's a spaceship up there, nestled in the branches. Sure, why not! There are a bunch of those nine-legged beetle-things crawling around, scouting things out, and two of them are standing together, their faces split apart from reveal a tiny alien-thing in each having a conversation. So they aren't robots or drones, they're vehicles. This came from the players, in case you thought it didn't, despite almost certainly knowing better by now.

While the Fool and Ash start to make plans to find and disable some sort of central nervous system for the ship, Fang has an "Enough talk!" moment and just strides forward out of their cover to have hair-words with these alien-things. She doesn't go ten feet before a nonapod lurking above them snaps her up into itself with its shooty-line-thing, then go scuttling off to the ship. (This was a compel, of course.)

Thinking quickly, the Fool throws a thread at the nonapod, which sticks (impossibly), and now they can follow the thread and find Fang. Great idea! This they now do. Of course, they both fail their Sneaky roll, and the Fool's player decides to succeed at a serious cost. So they get in there, avoiding notice, and find where Fang's being held. That's when the ship lifts off into the air.

And that's where we left it!

These girls could not have been more thrilled with the whole thing. "We have to do this again" and "Oh my God, that was so fun" and so on. My goal is to get one of them comfortable enough with FAE that they don't need me anymore to play. I don't think it's going to take long.
Posted by Mike Olson at 8:00 AM