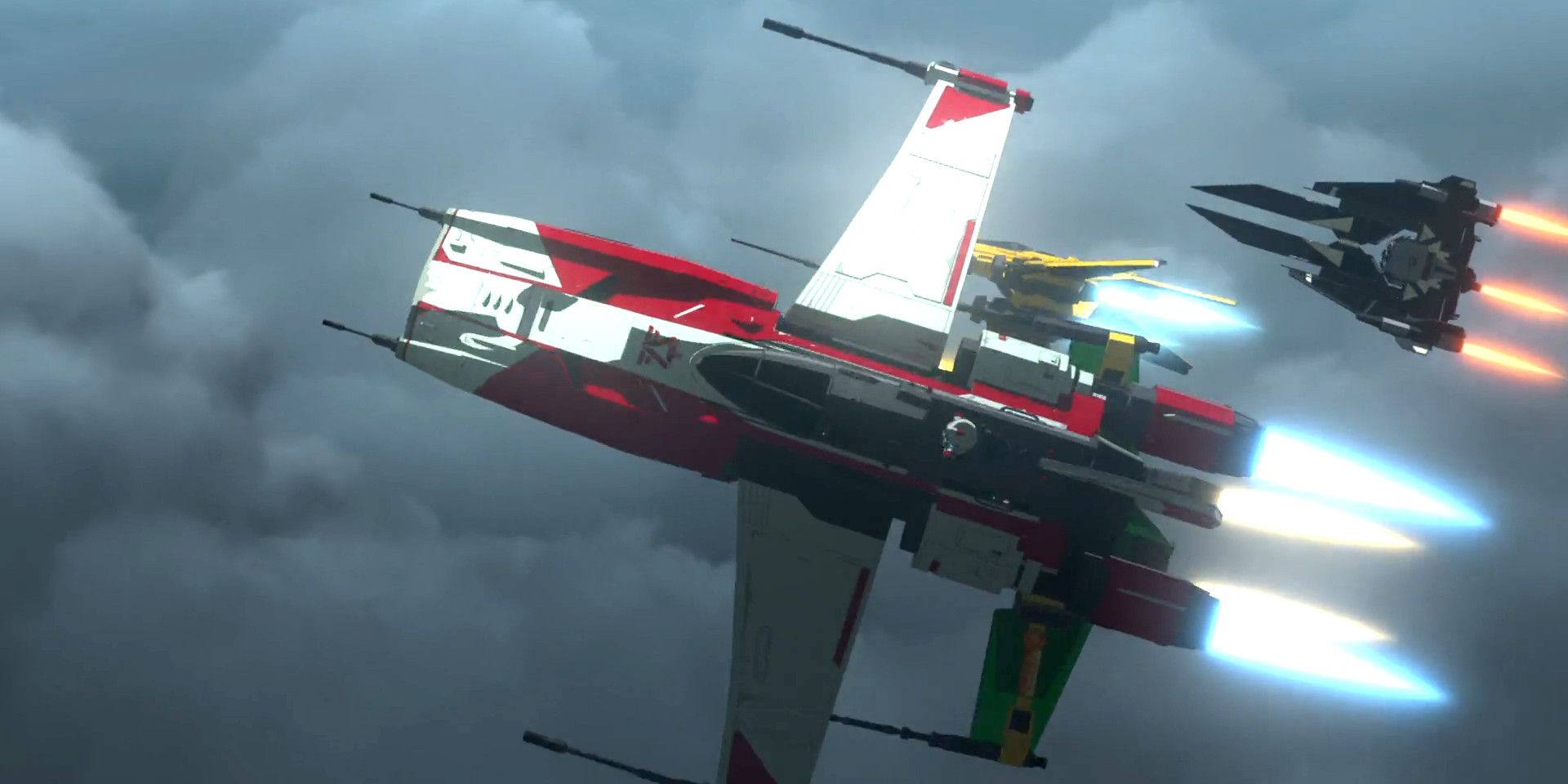 The ships of Ace Squadron, which consists of "aces," all have the word "Ace" in their names. I'm not sure if this is confusing or just appropriate, but it does make for some easy color-coding.

Making these ships was fun not only because it's fun to make things (it's true!) but because it was also a test of the ship-construction rules I wrote for Tachyon Squadron. If you were a Kickstarter backer, you'll be getting that probably sometime this summer. (I'm guessing late summer; it's supposed to be in editing through June, and then there's layout and a couple rounds of last looks, so July or August?)

Two things must ye know about these ship-construction rules:

One, balance was not a guiding principle. There's no tradeoff for having a low-quality ship vs. a high-quality ship. This was a mandate from Tachyon Squadron creator Clark Valentine, and I stand behind it.

Two, every effort -- well, nearly every effort -- wait, let me back that up again -- efforts were made to avoid turning it into a point-buy thing. The guidance in the core book was the primary touchstone, and where more detailed design was needed, more detailed design was produced, but the rules in this supplement don't vary too wildly from what's in the core book to begin with.

There's no change to equipment bays, other than an expansion of what can be put in them -- there's a bunch of new modular equipment from Draconis, the Dominion, and the, uh, less-savory elements of the setting -- so I'm not going to into any detail on that. Upgrades more or less follow the guidelines for designing new ships on page 138, with a couple notable exceptions, such as adding an extra damage-instance box to a damage track or eliminating the implication that equipment bays go hand-in-hand with higher-quality ships (they can't, because that's a function of scale now, not quality).

All of the Aces -- Green, Red, Blue, Black, and Yellow -- are scale 1 ships of Good (+3) quality. They are significantly better than the standard Average (+1)-quality ship of their scale. If this were a Tachyon Squadron game, it'd be ridiculous how good these ships are. But it's not, and hey, these are the Aces, man! They all have supremely tricked-out ships. That's their whole deal.

Speaking of which, here are their character sheets. You'll note that their design is considerably different from the character sheets I posted before. I want to make sure there's no confusion regarding which sheet to use under which circumstances. As a player, I don't think you could reasonably mistake your ship's sheet for your character sheet. I'm constantly worrying about things like this when I make character sheets -- ease of use.

I think the sheets are pretty self-explanatory, but I'm gonna explain more anyway. Specifically, the character-specific reasons their ships have been designed and statted-out the way they are. The source material doesn't provide a ton of information about these ships, so I've had to make do. 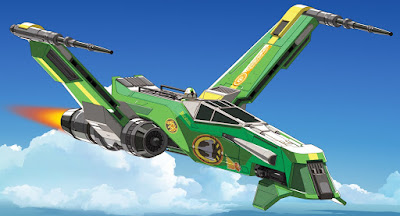 Green Ace's big distinctive feature is those movable wings that can "shift angles for maximum maneuverability while speeding through turns." Given that, it seemed like the most suitable way to represent that was by making the ship especially good at getting on someone's tail or shaking a tail, so that's what we have there. Mechanically, I've treated this is as a piece of modular equipment, but narratively it's obviously not. Ultra-Maneuverable isn't a great aspect, but I'm hoping to think of a better one before Gamex. It'll do. 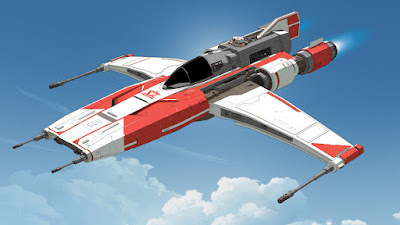 Red Ace's description is all about the practicalities of its design, which is great for me. "Technologically powerful," "built for precision performance," "delicate balance of speed, acceleration, and power" -- these are all very useful phrases. In contrast to Green Ace, I'm really into Red Ace's aspect (Power. Precision. Performance.) because it sounds like a commercial for a German car. The modular equipment here is straight out of the book, but I think they suit Freya very well. She's more cautious than the rest and more concerned about tactical advantage. She spends most of her time in Red Ace racing, but she's studied for a fight and built a ship to match. 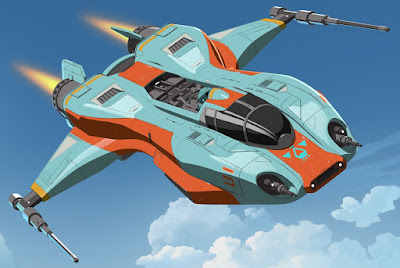 The thing to remember about Blue Ace is that Torra Doza's over-protective father paid for it, so of course it's the sturdiest ship of the squadron. It has a shield generator booster, three shields, and an Armor rating. It's a Volvo. Captain Doza just wants to keep his little girl safe, but not so much so that she doesn't get to fly combat missions. Complicated relationship, there. 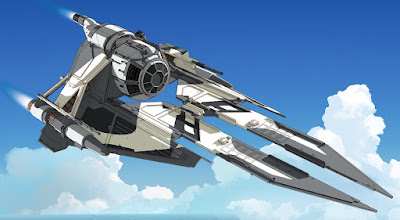 Black Ace is the opposite. Not only does it only have two shields, but Griff has rigged it so he can redirect power from his shield generator to his propulsion and weapons systems. He's still used to flying a TIE with zero shields; it's a point of pride with him. If you're a good enough pilot, you don't need those shields. Shields are for rookies! He's put all his upgrades into a high Weapon rating and a good targeting computer. The best defense, etc.

Black Ace is objectively the coolest-looking ship of the five. Nothing game-related; it just needs to be acknowledged. 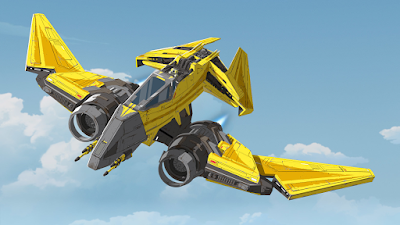 Yellow Ace is the weird one, as expected with a ship that can shift its four wings into different configurations. This is reflected mechanically in the ability to swap the ratings of the ship's starfighter skills. At the start of his turn, Bo can pick two skills from Pilot, Gunnery, and Tactics (but not Technology, which is always going to be +3) and swap their ratings. I hope this is interesting in play. I've tried to make it a meaningful choice by limiting the ratings in question to +4, +2, and +1, so you can never have, say, +4 Gunnery and +3 Pilot. That gap from +4 to +2 means that compromises will have to be made. As for the rest of the ship, apparently Bo pushes the envelope so much that he tends to crash Yellow Ace a lot, so he has a couple extra damage instances to help deal with that. Bo's ship is also be difficult to pilot for anyone who isn't used to it (i.e., anyone but Bo), so I threw in a little sorta-stunt to reflect that: anyone else who flies it minimizes a die on all rolls. It doesn't really fit in mechanically as an actual rules component, but it feels right thematically, and ultimately that's why we're here.

(Bo is my favorite.)

You may have noticed that I've basically separated the pilots' spacefaring skills from the actual pilots, and then renamed them to "starfighter skills." Again, that's me being concerned about players having to look back and forth between two pieces of paper, and I figure if I put all the skills they need for space engagements on the ship sheet, there'll be a lot less of that.

Also, they all have Pilot at +4. They're five of the best pilots around, and they routinely race each other in their downtime, so it didn't feel right for one of them to be objectively better than the others at this stuff. Using the ship-construction rules, I could have bumped that +4 up to a +5, but I didn't want to do that for two reasons: one, +4's already literally Great, and two, they're obviously going to face some pilots who are better than they are (on paper) and I don't want the skill-ratings arms-race to get too ridiculous.
Posted by Mike Olson at 8:00 AM

You call it a Volvo, but that Blue Ace is clearly a Ford GT40 with wings.

Oh, absolutely. It's just as safe as a Volvo.

I can't insert images here, but others have noticed the resemblance: https://i.imgur.com/squWYHD.jpg

No, wait, that's a Porsche.