I know this has been done by others, but I've had this kicking around for a while and figured it was worth posting in case anyone else is interested in it. It's in a pretty rough state, so forgive it its roughness.

Most of the system is the same as standard FATE (or my take on it, anyway), with a few differences.

A character's skills, personality, weaknesses, and etc. are represented by his aspects. Each character has 10 aspects, rated between 2 and 5: four at 2, three at 3, two at 4, and one at 5. The higher the rating, the better the aspect.

When you use an aspect, you roll a number of six-sided dice equal to its rating. This use of an aspect is called tagging. Every die that comes up even is a point. You'll always be rolling against a target number, either a static one determined by the GM or another character's point total from an aspect roll. Every point you score in excess of your target number is a shift.

The first aspect you tag in an exchange -- your primary aspect -- is called your lead, or your leading aspect. After rolling your lead, you can supplement it by spending a Fate Point and tagging an additional aspect. This additional aspect is called a twist. Add any points gained from twists to the points gained from your lead. You can keep adding twists as long as you have aspects to tag and Fate Points to pay for them. A twist always costs a Fate Point, even if the aspect being tagged hasn't been used in the scene yet. Any aspect can be a lead, including scene aspects or another character's aspects or consequences (but not your own consequences).

For example, Christian is in a duel with his brother Henri. For his lead, his player chooses Christian's Good-rated aspect "Rivalry with Henri," and rolls 4d6. This only gives him 2 points, so the player decides to spend a Fate Point to tag "Finely Crafted Rapier" for another 2d6.

All aspects start off open in a scene, or able to be used at no cost. Once you use an aspect in an scene, it becomes locked. Locked aspects require a Fate Point to unlock, or use again in a scene. Each aspect can only be used once per exchange.

If all of a twist's dice yield points, an aspect of the roller's choice is unlocked. This could be a personal aspect, a scene aspect, or even another character's personal aspect. It could also be a consequence, if we're being liberal with the definition of "aspect." And we are!

Aspects can be compelled, as per usual in FATE.

While FATE's skills aren't around anymore, their mechanics still work the same way. Just take a look at what's trying to be accomplished and use the appropriate section of the FATE rules. For example, if you want to use your "Raised By Wolves, But Went To Bloodhound Daycare" aspect to track someone, use the Investigation rules. It's up to the player (with the GM's approval) to use whatever aspect might be appropriate for the task at hand. Basically, any aspect could be used for any skill, as long as it can be justified. If it can't, then it can't.

Great: The Bravest of the King's Musketeers
Good: Swaggering Son of Gascony, Rivalry with Henri
Fair: "We are the Brothers D'Aramitz!", Weakness for the Fairer Sex, Loyal to France
Average: "That's enough out of you!", In the Nick of Time, Daring Rescue, Finely Crafted Rapier

I know it's been a while since I rapped atcha, but that's because we've been in the final weeks of pregnancy in the Olson household. As of yesterday at 5:12 pm, we're the proud parents of a 7-pound-2.6-ounce, 21-inch long, healthy, happy, and seriously laid-back baby boy named Benjamin Russell Olson. He's our first, and the first grandchild on either side of the family, so he's kind of a big deal.

For pictures of him, check out this quickie website I slapped together for the occasion. Check it out if you're so inclined! And you should be inclined -- how can you say no to this face? 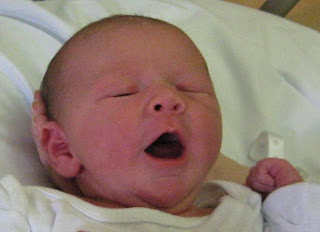