I have a preview of the cover for Atomic Robo: The Roleplaying Game below, but first, a brief post-mortem on the Fate Core Kickstarter that just ended.

Seriously, 10,103 backers? Who was expecting that kind of incredible support? If you're a backer, take a moment to realize that's 10,102 other people who now have Fate Core. Find them and play! It's out there in the wild in a big way. I'm willing to bet that most games available for free on the Web aren't downloaded by 10,103 people over the course of 56 days. If you were already one of the Fate faithful, I have good news. That game you like, to paraphrase a certain backwards-talking little person, has come into style in a big way.

Pretty cool, right? I came into Fate Core late in the development cycle, and I had nothing at all to do with the management of the Kickstarter (I was as surprised by The Day After Ragnarok and Dresden Files Accelerated announcements as you were), but still: If you kicked in even a buck, thanks for supporting this game I worked on. You guys are great, and I'm excited for everything that's about to come down the pike.

Anyway -- the cover! Check out those robot fists! 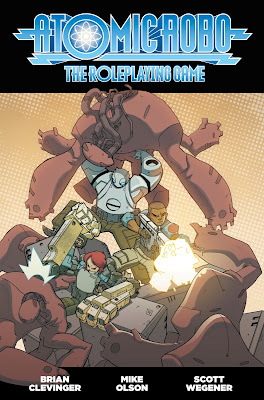 OrcCon's comin' up, President's Day Weekend (February 15th-18th), and that thing is positively lousy great games. In particular, and of more immediate concern for you if you're reading this blog, it's lousy with Fate Core games. Here's a breakdown of who's running what when, and how many seats are still available as of this posting, after Saturday's initial pre-reg onslaught.


At the risk of sounding, like, way into myself, I'm probably looking forward to my D&D Fate Core games the most. I kinda love the characters I made -- they're full of rules tweaks, including two separate magic systems, and I'm really curious to see how they play. I'll post the character sheets in the next week or so.
Posted by Mike Olson at 9:49 PM 2 comments: 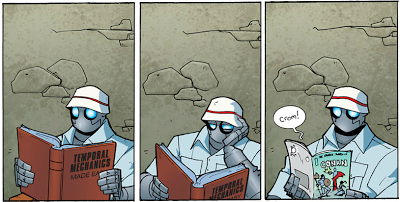 Hey, Happy New Year! I know I'm more than two weeks late on that, but the baby was two weeks early, so it all balances out.

(BTW, have you checked out the Fate Core Kickstarter lately? It's doing all right.)

The usual thing I say in answer to the question "How's Atomic Robo coming?" is "Work continues apace," which is wholly accurate. But for all that, it's not a very interesting answer. So I figured I'd give a little progress update here in the form of a tentative table of contents -- or at least the names of the chapters as they stand now, not in any particular order other than the one that makes sense to me right now off the top of my head. The bolded stuff is already done and ready for editing, barring a few examples or something. The italicized stuff is at least partially done.


So, as you can see, it's mostly good to go (to editing). The current wordcount (not counting "Robo's World") is about 70,000 words, which is trending on-target.

A few details on the in-progress chapters:


So there we are! Pretty close.

Oh, and obviously, revisions to Fate Core prompted by Kickstarter backer/playtester feedback will have an effect on ARRPG, but right now it's tough to anticipate how much of one, so I'll deal with that as it comes.
Posted by Mike Olson at 8:00 AM No comments: