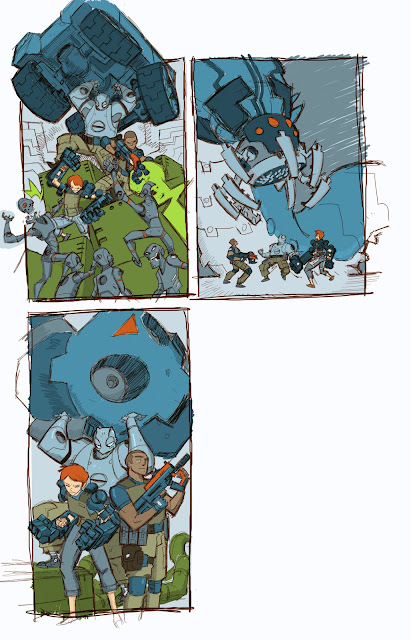 Scott's been noodling around with cover ideas for ARRPG. Thoughts? Other than my first thought, which was "Those robot fists are awesome!"?

Related: Several chapters of ARRPG have been submitted. By this I mean that they've been put in a place online where an Evil Hat editor can eventually get to them. More chapters are being revised and written as I type this. Well, not exactly as I type, because I'm typing this, and I can only type one thing at a time. I guess I could alternate characters between this blog post and the chapter, but -- look, I feel like we're getting off-course here.

Also, Action Scientists, aka playtesters! Thanks for your work on the secret mission you've been assigned! Good stuff. Keep 'em coming.
Posted by Mike Olson at 11:50 AM 1 comment:

So everyone knows about this by now, right? 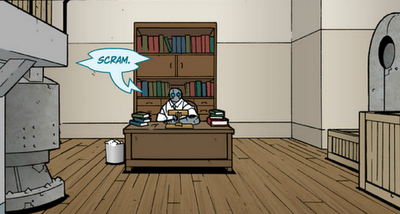 Round 3 of playtesting for Atomic Robo: The Roleplaying Game is now closed, which means no new playtesters will be... what's the word... accepted? Required? You get what I'm saying. We have a lot of playtesters, but I don't anticipate any further significant changes -- changes large enough to warrant more full-scale playtesting -- to the rules as they currently exist.

So... if you were like "I'm gonna get in on that Atomic Robo thing on Tuesday!" then allow me to offer my sincere apologies. Missed it by that much.

If you're already a playtester, your feedback's still welcome, but now is the time to move into the next phase of things. That means turning what we have into something that looks like an actual manuscript, adding/adapting some more content from Fate Core, and generally getting everything in a state won't make the editor mad at me.

In the absence of constantly updating you on playtest-type stuff, I plan to offer some genuine preview-type stuff along the lines of the character sheets I posted yesterday. Stay tuned!
Posted by Mike Olson at 11:25 AM 1 comment: 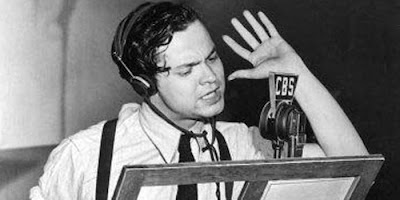 I had fun making these characters for the one-shot tomorrow, so I figured I'd share 'em with you all. Apart from a rare couple of exceptions, I haven't been making full-on pre-gens for these playtests, because I've wanted to see how players handled the E-Z No-Math Character Creation that's the default in Atomic Robo: The Roleplaying Game. But I think I've seen plenty of that thus far, and besides, I have to write up a number of characters from Robo canon anyway.

And you know what? It was a lot of fun. '30s Robo, Jack Tarot, and Helen in particular, because it gave me an excuse to pore over The Deadly Art of Science. Of the other two characters, one's based on Welles'  character in his War of the Worlds radio drama, and the other's wholly invented but a plausible participant in the events of the scenario. (I also enjoyed finding character portraits, which is something I rarely do.) Regardless, they all look fun to play. Here's hoping I'm right about that, eh? Guess we'll find out tomorrow at Dice House Games!

[Atomic Robo] and the Invaders from Mars

This Sunday I'm running an Atomic Robo playtest at Dice House Games in Fullerton. I was debating whether the scenario should be themed after Halloween or the election, since it's proximal to both. In the end, I decided that Halloween scared me less, so Atomic Robo and the Invaders from Mars it is!

It's not really a big public event, but I figured I'd mention it to the big public nonetheless. If you're around and want in on that, let me know in the comments. I plan to start at 2:00, and I'll take up to five players. Plus, it's a Game Day at Dice House, so stick around after and play some other games.
Posted by Mike Olson at 9:49 PM No comments: