[Atomic Robo] News You Can Use 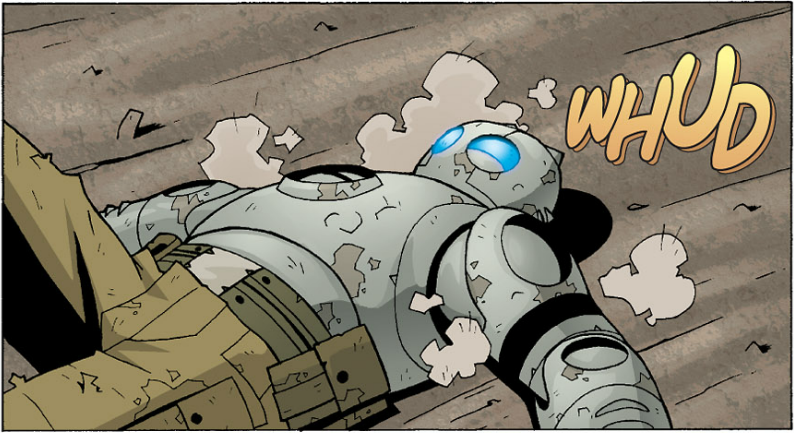 I know it's been a long time since I rapped at ya, but I've been busy with a variety of things -- many not even gaming-related! But I did want to post about a couple notable recent... things.

First off, Atomic Robo: The Roleplaying Game has been nominated for an Origins Award for Best Role-Playing Game! It's a real honor. Even more of an honor is the crazy list of other nominees: Dungeons & Dragons Player's Handbook, Firefly, Icons Assembled, and The Strange. As you can see, those range from pretty huge to as huge as they get. Two of them I own and like, one I've only played, and the last I admittedly really know nothing about other than it's from a highly respected, well-known designer and its predecessor cleaned up at the ENnies last year. (Guess which one is which!) Seeing the team behind ARRPG on that list... it's surreal.

To say that I do not anticipate that ARRPG will win is something of an understatement, but that's fine! It's amazing to see it up there with those other games. If you'd like to help it along, though, go here and vote for it. Or any of the others! They're all great! And there are other things to vote for, too, so vote for those. I... don't really know what this online voting means -- I coulda sworn there was a judging panel or something, and that the fan favorite award was voted on by Origins attendees -- but hey, it can't hurt.

Second off, what'd you do for International Tabletop Day? (It was April 11th.) Me, I playtested the Sparks Nevada Thrilling Adventure Game for four Thrilling Adventure Hour die-hards, then saw the final monthly Largo show. Bittersweet, but I'm so glad I got to be there.

Meanwhile, elsewhere in LA, the man known as the Dungeon Bastard, aka Bill Cavalier, aka Tom Lommel, and Lyndsay Peters, who has the audacity to face the world without a single alias, let alone two, ran a demo of Atomic Robo at ITT HQ. I wasn't able to attend, but it went well. Pretty cool, that thing happening at that place for that event. The best part? I wasn't even involved! Always gratifying when you discover that someone else likes your work enough to actually use it.

What's more, Mr. Bastard has kindly put his materials for the game online. It was a little nonstandard, and certainly deviated from one or two standard ARRPG standards and practices, but it worked, so who cares about that. Maybe you can make use of the Bastard's work to run a Robo convention demo of your own! In fact, go do that.

And that's it for the news, I think! Oh, I ran a Majestic 12 playtest at Kingdom-Con in San Diego last weekend, and it went well. The supplement's mostly done, barring a minor but important change as a result of the aforesaid playtest and some adventure hooks by Brian Clevinger and myself that we thought would be handy. Plus, new modes! New skills! New mechanical bits to make things extra-Majestic! New Scott Wegener art! Tons of background material from Brian that may never make it into the comic! I'm looking forward to getting it into your hands. (If you don't have hands, we'll work something out.) Should be out in June.

Coming Up: Gamex is happening soon! I'll do my usual roundup of Fate games so you can schedule accordingly.
Posted by Mike Olson at 11:41 PM No comments: