Posted by Mike Olson at 5:31 PM No comments:

[Strange Fate] The SRD Has Landed

Hey, so this is very cool: RPG.net user thecosmicgoose has extracted the OGL bits from The Kerberos Club (FATE Edition) and made a system-reference document out of it. Now, admittedly, it's basically two chapters from the book with all the non-OGL stuff excised, so it's not exactly pretty, but hey, what do you want? No doubt the it'll be subject to some prettification later, and by someone other than me, because man, I do not know what I'm doing on that front.

Anyway, the SRD is here. Check it out and have at it!
Posted by Mike Olson at 11:43 PM No comments:

[Atomic Robo] Playtest Round 3 Is Now 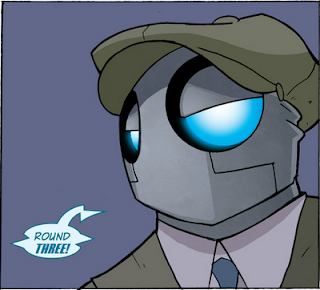 At last, the time is upon us, as foretold in the scriptures. By "scriptures," I mean "this blog, a few days ago."

Last night I sent out an email to the Round 3 playtesters. If you should've gotten it (because you sent in your signed Disclosure Pledge) but didn't, contact me and/or leave a comment here.

For pre-existing playtesters, this revision contains some pretty significant changes -- all improvements, from where I'm sitting. Weird skill construction has been spelled out more clearly. Ditto brainstorms, plus a minor change to how they work. One of the modes lost a skill. (Guess which one!) (It's Action.) All of the sample characters have been revised. A bunch of little typos have been fixed. Terminology has been updated. A chapter on the basics of Fate Core has been included. (About time, right?) Challenges have changed a lot. E-Z No-Math Character Creation has been simplified even further. Etc.

So yeah, it's been a pretty thorough revision. Every document got some attention to one degree or another, although the big winners were Modes, Skills, and Stunts and Challenges, Contests, and Conflicts (previously known as Contests, Challenges, and Conflicts). Part of this is because Fate Core is in an advanced stage of editing, which means I have a more definitive set of rules to draw from for ARRPG, and part of it's because we've gotten some great playtester feedback to incorporate. By "great," I mean consistent -- the commentary has been pretty uniform overall, which makes it easy to know what needs work.

In other words, thanks to all you playtesters who've gotten back to me with comments! Even though I haven't replied to all of you, because I'm just one put-upon man and you are legion, rest assured I read your emails and appreciate you taking the time to send them. Keep it up!

UPDATE: If you're not part of the playtest yet, it's not necessarily too late. Download this and follow the instructions.

Speaking of playtesting: Morgan Ellis, friend of the blog, ARRPG collaborator, and my platonic Fate-mate (starting to rethink that phrase now), is still looking for a couple of players for an ongoing ARRPG playtest campaign in the Los Angeles area. If you want in on that and you're cool -- what am I saying! Of course you're cool. You're reading this, aren't you? Anyway, get in touch with him if that's you.
Posted by Mike Olson at 8:00 AM No comments:

Heya, folks. Sorry to disappoint, but seeing as how it's Saturday night, I think I can safely say that I'm going to have to postpone the next round of playtesting to next week.

The past few weeks have been... profoundly unproductive, for a number of reasons -- not the least of which was the lymphadenitis that laid my son low this past week. It sounds worse than it is, but you know what? It's still pretty bad! He's okay now, though, and just in time for his birthday party tomorrow.

Anyway -- the Round 3 revision is pretty significant, so the additional few days' wait will definitely be worth it. E-Z No-Math Character Creation has been simplified even further, and I've cleared up how modes, skills, and actions are presented, which has important ramifications for other chapters as well (even if only in terms of consistency). There'll also be a chapter on "The Basics" of Fate Core, because it's kinda shocking there hasn't been one until now. And also other stuff. I'd rather own up to missing a self-imposed deadline than rush it.

So stick with me, Action Scientists. Better news to come next week.
Posted by Mike Olson at 5:23 PM 5 comments: