About a month ago, when Rob Donoghue was posting about his Fate Accelerated hack he's dubbed FAE 2 (in which you apply two approaches to a roll instead of one), I started thinking about the possibilities of paired approaches in terms of mechanical hooks, because that's the kind of person I am.

Anyway, the thing that struck me was how each approach just intuitively pairs better with some approaches than others. To me, at least. Like, it makes sense that you could try to be both Careful and Sneaky at the same time -- the latter seems to require the former, even -- whereas a Careful-and-Quick combo seems like a harder sell. I'm not saying you can't be both Careful and Quick; it's just not as easy as being, say, Flashy and Quick.

So I made this:

When you combine related approaches (connected by a solid line), you get a +1 to your roll.

When you combine opposed approaches (unconnected by any line), you get a -1 to your roll.

(Notice how they ended up in alphabetical order if you go counter-clockwise. Coincidence? Probably, yeah.)

I'm also interested in the idea that the GM would pick one of your approaches for a given task and you'd pick the other. Maybe not all the time, but the option's there.

For example, let's say you're fleeing from eighty-five beholders and there's a locked door in your way! This is terrible. The GM says, "Whatever you're gonna do, you better do it Quick." You have Careful and Clever +2, Sneaky and Quick +0, and Forceful and Flashy +1.

One stunt that immediately suggests itself is improving the relationship between two unrelated approaches. Maybe you're better at being Quick and Clever than most when you're responding to an insult, or at being Forceful and Careful when using explosives. In fact, if the character sheet shows the approaches as in the graphic above, you could even just draw new dotted or solid lines to reflect this. You get the idea.
Posted by Mike Olson at 1:08 PM No comments:

I got my first chance to playtest Thrilling Fate with a Sparks Nevada scenario last weekend in San Diego. The PCs were Sparks, Croach, the Red Plains Rider, and Cactoid Jim, and though they were played by four players who had zero familiarity with the source material, there were nonetheless some moments that felt like they could've come right out of a Thrilling Adventure Hour show.

So yeah, I'm making some changes, but on the whole I'd say it went quite well! Of course, the players were all friends who were already well-acquainted with Fate, and had played various hacks of mine before, so I may have had a best-case player group there, but whatever. The fact that I'm making changes is at least indicative of a productive playtest.

One kinda weird thing that came up while playing was how liberating it is to just roll dice. Y'know, without worrying about what skill to use. Because Thrilling Fate doesn't have skills. So after the roll, if you didn't like your result, you might do something about it, but until then there's literally nothing else to think about other than "Let's see who wins." It just felt great to say, "This thing is happening, everyone roll dice."

Now, I realize that when I say that, your reaction is probably something along the lines of, "Hey, that doesn't sound like a great or innovative thing you're talking about there, and also I really do like to make interesting choices about my character when I roll dice for a thing," and I understand that. What's neat is how the exhaust-an-aspect mechanic puts that choice entirely in the realm of the fiction, without anything as abstract as even a broadly defined skill, like Athletics, getting in the way. I dunno. I'm probably not explaining it well. But the difference between "I dodge because I have +3 Athletics" and "I dodge because I'm a Quick-Thinking Man of Action" was definitely felt at the table.

As for news, I've been given the go-ahead to post about this: Next month, I'll be running a Sparks Nevada game for TAH co-creators/writers Ben Acker and Ben Blacker and whatever Workjuice Players they can muster, mostly likely including Sparks stars Marc Evan Jackson and Mark Gagliardi -- and, if I'm very lucky, Hal Lublin will be there to narrate (I don't know what that'd mean in this context, but whatever, there's no way I'd pass that up). Plus, I believe it'll be audio and/or video recorded for your online listening and/or viewing pleasure at some point. No pressure, right?

I am super-psyched about this, as you might guess, and also probably more nervous than is required. But then again, I'm kind of in awe of everyone who makes TAH happen, I love it so damn much, and the prospect of getting to run a game for them, any game, is awesome, let alone a thing I've made for a thing they've made. They're pretty excited for it too, though, so maybe we can all just be giddy about it together.
Posted by Mike Olson at 8:00 AM No comments: 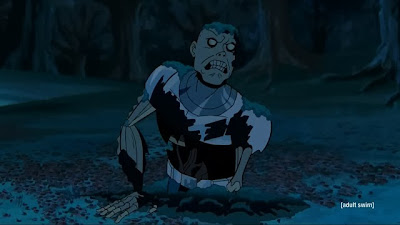 WERE YOU AWARE that this past Wednesday was the 75th anniversary of the Mercury Theatre on the Air's War of the Worlds broadcast? That's just one of many date-relevant facts I would've told you if I'd managed to get this posted before Halloween!

So when a zombie bites you, it's bad. We all know this. Any consequence from a Teeth attack will eventually result in the victim becoming a zombie, no two ways about it. It'll worsen from scene to scene, moving from mild to moderate to severe, until the victim is taken out... by becoming a zombie.

There's only one way to "treat" a Bitten consequence, and that's amputation. It's not the hardest surgery in the world, but man, you gotta do it fast. Regardless of the severity of the consequence, the difficulty to treat it is +6, and doing so gives you a severe consequence appropriate to the amputation. (I recommend Dis-Armed. I use it every chance I get.)

If that first attempt fails, no further attempts can be made. You are doomed. And if that Bitten consequence was already severe, then... see the previous sentence.

This is pretty rough, but a zombie can't actually make a Teeth attack without first invoking an aspect. It doesn't get the usual bonus or reroll for invoking this aspect -- all it gets is the opportunity to bite. We used to call this "invoking for effect." The idea is that it'd create an advantage with Claws, like Grabbed, then bite with its next action. Or the victim might be Surrounded, or maybe that Sprained Ankle slows them down. You get the idea.

Posted by Mike Olson at 8:00 AM No comments: