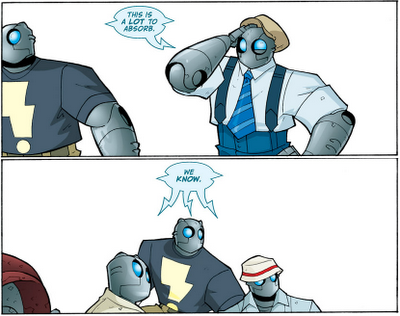 Wow, I really thought I'd posted once in October! I've had a hack I've wanted to blog about for the past six weeks or more.

Anyway, something more pressing has come up. Jonathan Hobbs asked on Twitter for more guidance regarding the creation and implementation of modes in homebrew Fate games. Specifically, he had these questions:

How do I identify the key areas of competency to represent?

Well, for ARRPG it was pretty easy, to be honest -- I knew Action and Science had to be in there, because of Action Scientists. Neither of those really covered talking, which is another thing characters in the comic do, seeing as how most of them are human and all. Thus, Banter. And then I had some other standard Fate Core skills left over, like Burglary, Deception, and Stealth -- again, all things humans need to be able to do -- which suggested the need for a fourth mode: Intrigue.

This is a bigger issue than just this, though. You're really asking "What is my game about?" If it weren't a game about scientists, there wouldn't have been a Science mode.

What is the impact of a larger or smaller number of modes?
Something Fred Hicks and I realized in the early days of Robo's development was that with four standard modes, you're really deciding "Which one of these isn't important to me?" Which is great for fast character creation, because your range of choices is very manageable. "She's not good with people" translates easily to not having the Banter mode.

How do I determine how many skills should be in these modes, and what is the impact of modes generally having a large number of skills (5-8) vs a small number (3-4)?
I'm going to make a few ARRPG assumptions: PCs have 30 points to spend on this stuff, skills cost points depending on how many applications they have, and the cost of a mode is the total of its skills' costs.

So assuming all that's in play, the number of skills in a mode is going to be practically limited by their cost. Generally speaking, I think you want to keep the cost of a mode below 10 points. Three 9-point modes still gives you 3 points left over to customize a little bit. Certainly I think it's useful to keep the costs of all of your standard modes at around the same value, so you can pick any given three and not worry about going over your budget.

Three of Robo's four standard modes are 9 points each, and the fourth, Science, is weird -- like, literally weird, not game-term weird. That's intentional. It's totally coincidental that each of those three 9-point modes happens to have six skills.

If you're not working with points and all that jazz, and are just eyeballing them, like the rules for modes in the Fate System Toolkit do, then -- well, actually, just seek out the FST if you haven't already, because it already has advice along these lines in it.

How do I determine if I should want a skill to be in many modes or few modes?
I say start with as few skills in each mode as you think it needs, and then fill in from there. If it only needs three, and you can't think of another that absolutely has to be in there, then keep it at three. If it has more than six or seven, ask yourself if the theme of the mode is too broad.

For example, I'm pretty sure the Action mode started with Athletics, Combat, and Physique as its core skills. Those are the things I expect a one-dimensional "action hero" to be able to do. Rambo, Indiana Jones, and Brienne of Tarth are different kinds of people, but I think we can agree they all at least have these three skills rated above Mediocre. Then I was like, wait, Robo's a pilot -- where does that fit in if his three modes are Action, Science, and Robot? Certainly it's not an inherent part of Science or Robot, and operating a vehicle seems pretty action-heroic, so Action acquired Vehicles. I think Notice came next, because only Intrigue had it at the time (before Science got it too) and it didn't make sense that anyone who isn't good at sneaking around is equally ungood at spotting someone sneaking around. Last came Provoke, because being intimidating seems like an action-hero thing, too. (Another skill that Robo definitely has that doesn't seem to have a place in either Science or Robot.) As it happens, these six skills came to 9 points, as did the six for Banter and Intrigue.

Basically, if you can rationalize that everyone with this mode should also have these skills, then that's what skills the mode should have. Can every robot crack wise? Like, does the typical Dalek bother with strong words or witty repartee or really care about people in a social way at all? The answer is obviously EXTERMINATE. So Robot shouldn't contain Provoke, Rapport, or Empathy, even though it isn't unreasonable that a robot could have those skills -- they're just not a product of that robot's robotic nature. But every robot is probably designed in a way that makes at least Athletics, Notice, and Physique relevant to its operation, so those are good candidates for core Robot skills. (I believe I gave the Robot mode in ARRPG Will as well, for two main reasons: to reflect the computer brain it likely has, and also that because I don't like my robots to be easily intimidated.)

What approaches for mode creation work well, and how should I be attempting to draft these up and piece them together?This... is tough. I mean, I've only used the one approach to doing this, really. Even the one in the FST is more or less the above method (so-called) without the mathematical rigor. I dunno, anyone else have any thoughts on different ways to approach modes?
Posted by Mike Olson at 8:00 AM No comments: