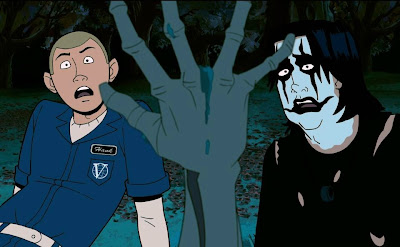 I thought up some mechanics for zombies a while ago -- almost two years ago, according to Google Docs -- so I figured I'd post about it on account of it almost being Halloween and all. I'm talking about aim-for-the-head, brain-eating shamblers here, so don't try to apply these to, I dunno, voodoo zombies or 28 Days Later zombies or whatever.

The typical zombie might rank them like this:
Fantastic (+6) Head*
Great (+4) Body
Good (+3) Teeth
Fair (+2) Claws
Average (+1) Legs
*I'm fully aware of how dirty this sounds and regret nothing.

When you attack a zombie, you choose how it defends -- Body or Head.

So, my God, how do you stop it? A successful attack on the Head takes the zombie out. (I'd fluff a tie against the Head as blowing its jaw off or something, thus the boost, but leaving the brain intact. Related: I'd also severely limit, or even eliminate, Weapon ratings, because all it takes is one shift on a headshot to take out a zombie. Like, shotguns and katanas are Weapon:1, but almost everything else is Weapon:0, and I don't mean Wolverine.)

Putting those two things together, obviously no one's going to attack a zombie's Body if it already has three consequences (or even two or probably one), but that's how these things usually work, isn't it? And mechanically, there's no reason to go for the Body once it's taken a consequence, because you can invoke it for free to cancel out the Head's higher skill rating.

It might seem odd for zombies to have a Great (+4) skill for defense, but it's not that they're so great at dodging or anything. On the contrary, they're easy to hit. They're just not necessarily easy to damage in a substantial way. So that's how I'd color that in play. Most failed attacks against their Body are actually going to be "narrative hits," in that I'd describe them as on-target but mostly harmless.

Next time: BRAAAIIINNNSSS...!
Posted by Mike Olson at 8:00 AM No comments:

A couple days ago, ARRPG layoutist Adam Jury sent me a two isolated pages to review, and after I did that reviewing, it occurred to me that they'd make a pretty good preview snippet for a preview-hungry public. They're not the most art-intensive two pages in the book, but they do a good job of showing you one or two ways in which we're swiping elements of the medium (of comics) for our own gamey purposes.

So here it is: an example of E-Z No-Math Character Creation. Enjoy!
Posted by Mike Olson at 4:00 PM No comments: 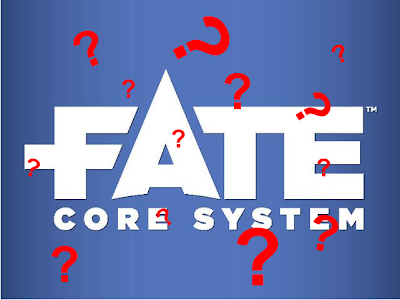 I do not know what my game will be. All I know is that it'll use Fate Core.

Let me be clear here: This isn't some kind of stunt. I really don't know. I've been busy with other things and haven't had much time to figure out a gimmick for this one, and usually, my one-shots are highly gimmick-based. Part of the problem is that I want to run something as close to RAW as possible to give people a good idea of what Fate Core (as written) is like, but RAW isn't really... something I do with Fate.

So... any ideas? I'm open to suggestions.

Oh, and if you're in the area, you should obviously come out and play!
Posted by Mike Olson at 8:00 AM No comments: 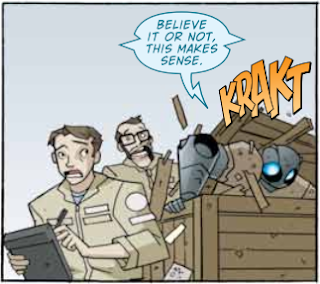 Anyway, there you have it. It's in layout!
Posted by Mike Olson at 12:17 PM No comments: