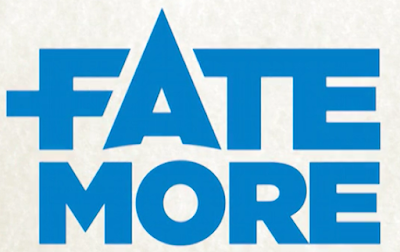 Hola, amigos! I know it's been a long time since I rapped atcha, but I've been hecka busy. Or... neglectful. Little of both, probably.

Anyway, I come to you today with an important message about Fate More.

What's Fate More? See, this is the problem.

Fate More is Evil Hat's Kickstarter campaign to publish more Fate material in hard-copy form. Most of this material has already been written and even released in PDF form, so the Kickstarter is basically just about covering the costs of printing and distributing these titles. It's already successfully funded, as you may be aware, but it's entering its final 48 hours and there are some really fantastic stretch goals and "Extras" that may go tragically unfulfilled. And the very thought of that makes the Hulk sad.

What's been unlocked so far? ONLY ALL OF THIS:
In addition, Evil Hat will release an open-license version of ARRPG's rules for modes, mega-stunts, and brainstorms. And I guess I'll have something to do with that, too. And if you think that's cool, there are plans to open-license other stuff, including:
(Forgive me for focusing on stuff I wrote or edited, but it's my blog.)

Speaking of the Fate Worlds & Adventures line, that's kinda the main thrust of this whole thing -- compiling them into full-color hardcovers. 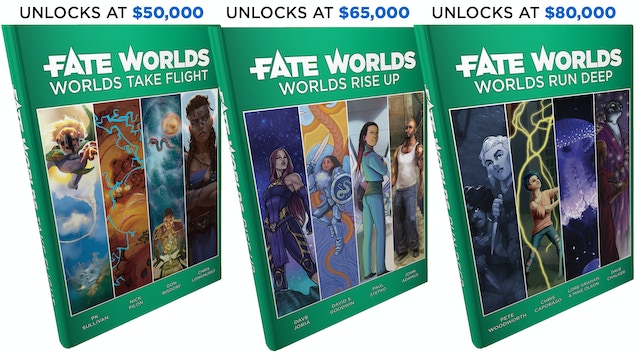 The campaign's almost certainly going to hit that $50K stretch goal, which includes two things I worked on (PK Sullivan's The Three Rocketeers and Nick Pilon's Frontier Spirit). But it's the third one, at $80K, that I most want to see succeed, because it contains Deep Dark Blue, which is the closest I've come to actually writing one of these things myself. The actual author is Lore Graham, who created and wrote the bulk of it, but I'm technically credited as a writer, I believe, mostly for my submarine construction and combat rules. So, y'know, for purely selfish reasons, I'd like to be able to hold that in my hands.

And, uh, so would you! Right? Because it also has Slip, which has got to be the weirdest of these things I've worked on (in a good way, of course), and Eagle Eyes and House of Bards. Imagine, an entire house of bards!

(I didn't work on anything in Worlds Rise Up, unfortunately, but it has four cool settings of its own: Behind the Walls, Sails Full of Stars, Gods and Monsters, and Nest. I wasn't involved with them and don't really know anything significant about them either, but Evil Hat don't make no trash.)

If this is you -- not literally Atomic Robo from 1926, but metaphorically -- Evil Hat explains it a lot more thoroughly in this Kickstarter update. And while you're there, back the thing! You only have about 48 hours left to help bring hard copies of these books (and all that open content) into existence!
Posted by Mike Olson at 9:46 AM No comments: