We still have a couple days to go before Gamex this weekend, and there are a bunch of Fate Core games on the skedge (that's short for "schedule" -- like I said, only a couple days left, so I don't have time to type out "schedule"), so let's break 'em down.

Someone must really want this guy dead. Sounds easy, but for 20k nuyen,
there must be a catch somewhere...

I've known Brian for years -- we spent most of those years playing in a couple of weekly D&D campaigns -- but I have no idea what this game is about. Sounds cyberpunky. Nuyen... isn't that a Shadowrun thing? Regardless, I'm sure he knows what he's doing.

Friday 8:00 pm: "Teenage Mutant Ninja Turtles & Other Strangeness" (GM: Morgan Ellis)
It's 1984 and the City is overrun by crime and corruption, the gangs control the streets, terrorism is rampant, corporations fueled by greed seek power and control, and Ninja clans lurk in the shadows. Only a small group of Mutant Animals born of some Strange Encounter, or created by Science,
and trained in the ways of the Ninja can clean up the City. Let's play some TMNT&OS using Fate Core.

First of all, this is how you write a blurb for a convention game: evocative but totally open-ended and vague. I can only assume Morgan wrote it that way for the same reason that I write 'em that way: because holy crap, the deadline to submit games is this Friday and I have no idea what I'm going to do, but I know I'd like to run a game of whatever, so here's something compelling without going into specifics. Textbook. Anyway, I'm in this game.

Saturday 9:00 am: "Robo Force" (GM: Me!)
Robo Force is the codename for the UN's league of highly trained Action Science Commandos. Their purpose: to defend human freedom against Baron Helsingard, a ruthless megalomaniac determined to rule the world at any cost. Led by the daring Atomic Robo and armed with cutting-edge science, Robo Force never gives up the fight! Rohhh-BO!

I ran a session of this at a Dead Gamers' Society meet-up back in March, and it went pretty well, so now I've put more effort and thought into it [read: I've been watching GI Joe] with the idea that it can go even better. It's also a chance to shine it up a bit in preparation for GenCon.

Saturday 2:00 pm: "Shadowpunk - Tailchaser" (GM: Seth Halbeisen)
Backstabbing and betrayal. Business as usual. But now it's happened to you. Well, you and your team. Now you've got a crap ton of marked data and no where to sell it too. No paycheck, and it looks like the target corp wants vengeance. Just another day in paradise.

I still don't know Seth Halbeisen! I believe we're connected via Google+ or something, but that's it. He's the most prolific Strategicon Fate GM I've never met. But he keeps running these games, and players keep signing up, so that's gotta be good.

Saturday 8:00 pm: "Vikings IN Vikings: Among the Vikings" (GM: Todd VanDerWerff)
America's love affair with Vikings continues, in this brand new adventure of seafaring Norsemen. Ride out to find strange lands off somewhere in the far West, lands filled with unusual men and fearsome beasts. Characters will be provided, or you can make your own Viking.

I'm not in a position to give out awards for best game titles -- but if I were, Todd would at least be in contention. I'm really looking forward to this game, not only because Vikings and Fate Core, but because I have this weird sense of... I dunno... pride? I introduced Todd to RPGs last year when I talked him into attending OrcCon, and now here he is, running a game I helped write! (He's also running Cat and Prime Time Adventures, a game he's supremely qualified to run on account of him being a TV critic and all.) But really, the fact that he's GMing multiple indie games per Strategicon has almost nothing to do with me and almost everything to do with Todd being a natural at this stuff.

Saturday 9:00 pm: "Spirit of Hyboria"
Come adventure in a land of ruthless warriors, vengeful barbarians and dark sorcerers. Where magic is a curse, and things man was not meant to know walk the land. Where the gods are watching, so be bold and live well. All this and swords too!

Obviously, if I weren't playing in Todd's Vikings game, I'd be in this game, guaranteed. I especially appreciate the "Spirit of" construction -- it feels old-timey at this point, which I like.

Sunday 2:00 pm: "F3: Return to the Expedition to the Sinister Temple of the Reptile Cult on the Borderlands" (GM: Me!)
OMG you guys, there are totally some more problems that only a party of adventurers can solve! This ode to AD&D (via Fate Core) is a sequel to a couple games I ran at the last OrcCon. If you played in those games, come reclaim your character! If not, come claim a character before those returning players beat you to it! Experience with Fate Core not required.

More of this nonsense. It was fun at OrcCon, so I'm going to see if we can keep it going. Because if we can, I'll run one of these at every Strategicon using the same PCs. Just like before, I'm using this game as an excuse to playtest something new I've been working on, so the PCs will look a little different than they did last time.

So there you go! A lot of great Fate games, just like I said. I did not lie. If I get a chance before the con, I'll post the Robo Force and D&D-ish characters.
Posted by Mike Olson at 4:43 PM 3 comments: 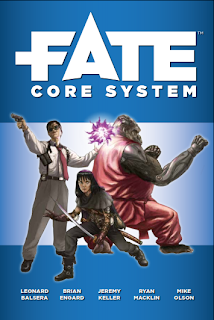 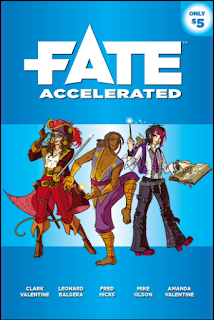 Yeah, I'm just stealing from Fred for the title of this post, but it's so damn apropos!

Fate Core and Fate Accelerated Edition are off to the printers. I have the PDFs right here. They look pretty great. I'm pretty thrilled that my name has somehow ended up on the covers for both books. Fate Core, I expected; FAE, I did not. But Evil Hat values their editors, so hooray for Jeremy, Amanda, and me.

Y'know what else is awesome? The cover price of FAE. Take that, Savage Worlds Explorer's Edition! I like Savage Worlds a whole lot -- I just never thought I'd see a mass-produced core RPG book that undercut its price point so severely. It's a good time to be a cheap bastard.

Anyway, I seem to have a bit more Fate System Toolkit work to do here -- editors, amirite? -- so I'd better get back to that, but I couldn't help crowing a bit about these two books.
Posted by Mike Olson at 10:04 PM 2 comments: