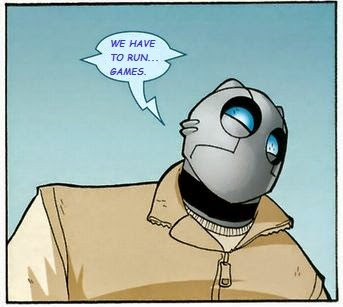 Speaking of Atomic Robo, you know about this new Kickstarter to get all of it reprinted in gorgeous hardcovers, right? And that it funded within 12 hours and still has, like, three weeks to go? And that one of the backer rewards is getting yourself name-checked in the comic? And that it's on a freight-train to the stars? Hop aboard! It's the Science Hobo way!
Posted by Mike Olson at 12:22 PM No comments:

Gamex is coming up over Memorial Day Weekend. That's just a few weeks! Event pre-reg opens tomorrow, so if you're planning to attend or just thinking about it, here's a roundup of the scheduled Fate games thus far. Not as Fate-heavy as some Strategicons past, but still plenty of variety. And you may notice there's something a little odd about this list of games. Can you guess what it is?

Voyages of the Starship Loki (Friday 2:00pm, GM: JiB)
Deep in the farthest reaches of the galaxy, far from the security of the Federation a lone Peacemaker class starship explores the unknown parts of the galaxy. These are the voyages of the starship Loki. Will the crew survive the dangers so far from home space? Voyages is a sci-fi game set in a Star Trek-esque future where humans have spread out to explore the galaxy using the Fate Core Rules.

JiB's all Fated-up for Gamex! He's normally a Hero kinda guy, but for this con he's going all-in for Fate. And all it took was years of positive experiences! Anyway, this sounds fun, right?

Kingsman (Saturday 9:00am, GM: JiB)
Welcome to Kingsman, tailors to the finest of gentlemen for over 100 years. MI6 has reported a potential threat to the crown. Arthur is certain that the government wankers won’t be able to do anything about it, so it’s up to Kingsman to save the realm yet again. Kingsman is a modern super spy game set in London using the Fate Core rules. Can you save the queen and the realm?

Hey, it's that movie everyone liked but me! Regardless, it's a super-solid premise for an RPG -- exactly the sort of thing that appeals to me. Clandestine private paramilitary problem-solving agency, secret history, fancy umbrellas... it's all there. You should be there, too!

Spirit of Hyboria (Saturday 2:00pm, GM: Seth Halbeisen)
Rippling Muscles, dark shadowy cultists, and way too many snakes. What every great struggle in begins with, except for you! Bring you sword, your skill, your subterfuge, your spells. Vanquish the rising tide of evil. Save innocent sacrifices. Barbarians always welcome.

Didja hear about that new Conan RPG coming later this year? Well who needs it! Seth's running this thing in just a few weeks! This is a Fate Accelerated Edition game, which seems perfectly suited to Conan to me, and Seth's been running plenty of Fate at Strategicon -- not to mention an ongoing Atomic Robo campaign at home -- so check it out. Enough talk! *throws dagger*

Aeon Wave (Saturday 8:00pm, GM: Patrick Thompson)
Discovery of an ancient Martian radio signal known as the Aeon Wave has led to the development of advanced technology called Aeontech. The shift of technological power toppled governments and gave rise to the megacorps who currently wage war over the priceless secrets held within. Hidden in the shadows of the megacorps freelancers battle to save humanity from the fate portended by the Aeon Wave.

Did you back this on Kickstarter? Either way, it exists now, so here's your chance to play it.


[UPDATE] The Wages of Despair (Saturday 8:00pm, GM: Morgan Ellis)
How you ended up on this worthless rock of a planet in the ass end of space is your own tale to tell. Another day paradise living on borrowed time and maxed out credit. But now OrbitOre Interstellar needs to move 80 megatons of unstable Anti-Matter across dangerous, uncharted space. They have a ship, all they need now is a crew. It’s a suicide mission, but a hell of a payday. What else have you got to live for? (Come play Bulldogs! Sci-Fi That Kicks Ass)

See here! Morgan's running not just a Fate game, but a Bulldogs! Fate Core game. (Did you back that?)

Vinternacht (Sunday 9:00am, GM: JiB)
People don’t travel away from Ebbe in the winter. But, then Ulrich was murdered and now none of you are safe. The Jarl’s thugs are searching through the town for you, but you escaped into the forest and climbed the Trollvegge. Now the weather is turning bad and it’s going to be hard enough just to survive the winter night. Vinternacht is a Viking age game using the Fate Core Rules.

JiB's really got a thing for Norse stuff, am I right? Anyway, this sounds like a fun game about camping.

And then there's Games On Demand, running all day Saturday and Sunday. I don't know exactly what'll be on offer there, but odds are Fate games will be happening at least once or twice a day, so if you miss out on everything else somehow, go take advantage of that. RPG coordinator Jim Sandoval really wants Games On Demand to be a big thriving thing at Strategicon, and you can help get it there simply by playing a game on demand.

Anyway, did you spot the odd thing about this list of games? It's that I'm not on it! Yeah, for the first time in I don't know how long, I'm not running a Fate game at Strategicon. I am running a game -- Star Wars: Blood Moon, Friday night -- but it uses Mini-Six, not Fate. Change is good. Plus I have all of these other games that I don't often get a chance to explore. Plus it's just good to play a variety of games. Okay, I think I've justified that well enough.

If more Fate games get added, I'll update this list. Like I bet Morgan's probably planning to run something. Stay tuned!
Posted by Mike Olson at 11:31 AM No comments: