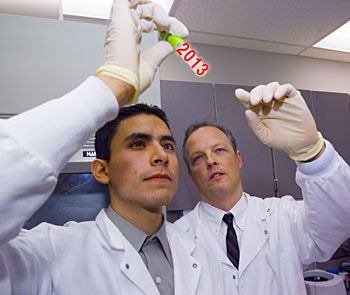 Hey, so 2013 was a pretty great year, right? The kinda year people make lists about.

A couple weeks ago Thrilling Fate got another playtest, specifically to try out a couple changes that cropped up as a result of the last playtest (which, as you may recall, was awesome).

The major one had to do with cues, the roleplaying-prod mechanic. I'm trying to standardize cues for all PCs so it's easier not just to make characters, but to make quick comparisons between them. In my last post, I talked about how I'd given them categories (a proactive mannerism, a reactive response, two connections with other PCs, and a big dramatic cue that only happens once an episode). Every PC has a potential connection with every other PC, as shown on their character sheet, but not all of them are in play in a given episode.

I'd planned to use the connections to establish ties between PCs by having each player name another PC and say something about them, something to setup the current episode. I was thinking it'd be stuff like "What did they reveal to you yesterday?" or "How did they recently disappoint you?" We'd start with Sparks -- "When last we left our hero..." -- who would pick someone, and those two players would have a connection with one another for that episode. Then it'd be the second player's turn, and we'd continue until everyone had two connections (so it'd loop back around to Sparks with the last player).

Trouble is, that requires a certain degree of familiarity with those characters, and as it happened, Will Huggins, playing Sparks, didn't really know anything about Sparks Nevada at all beyond the theme song. Neither did Jim Waters, playing Cactoid Jim. (Gina Ricker and Jason Tryon are both relatively recent converts to the Thrilling Adventure Hour, so they had good handles on their PCs -- Red and Croach, respectively. And Gina did a spot-on accent for Red, I gotta say.)

So we went with Plan B, which was this: Everyone circles their connection with Sparks, then picks one other connection with another PC. Cross the rest; they're not relevant in this episode. (Sparks circles his connection with Croach.) This proved to be a great alternative, and resulted in a lot of what I'd call "mechanically productive" player interaction. More than last time, even.

The other change I wanted to test out didn't actually get any actual "testing," unfortunately. I changed troubles to be more straightforward and more reflective of how the show usually goes. Now it's this: You have three trouble slots, each with two check boxes. If an attack against you is a success, write down a trouble and check one box. If it's a thrilling success (success of 5+), check two boxes. If you ever check a fourth box, you're defeated. No more tracking damage.

The intent is to let, say, Sparks intimidate a guy to give them a trouble, then, when that troubled badguy decides to get violent anyway, he guns them down fair and square. (Most NPCs won't have as many trouble slots as the PCs do.) It feels like it could use an escalation mechanic, but man, that really seems too fiddly and involved for what the rest of this Fate variant is trying to do (which is, basically, not be fiddly or all that mechanically involved).

Fun-wise, fun was had. Once again, the PCs seemed to have been written well enough that even players who weren't familiar with the source material were able to help create an authentic-feeling episode of play. Since then, I believe Will and Jim have both subscribed to the podcast and have plans to attend at least one show at Largo, so once again, Acker and Blacker, I have created new fans for you. You're welcome.

THE FUTURE... OF TIME!
Planning on playtesting against on January 19th, again at Game Empire in Pasadena, assuming I can think up another scenario and stat up some new PCs for it. Whatever it is, it'll have the Troubleshooter, Mercy Laredo, and, like, Gene Peeples as PCs. (For some reason, I want to do something featuring K of the Cosmos. As an NPC, of course.) I can't believe how many of these game days I've attended lately. (Two.)

I'm also going to run at least one session of Sparks Nevada at OrcCon in February, plus Atomic Robo. I have this Robo scenario in mind that sounds like a lot of fun, but I have no real idea how to do it just yet. The premise is that the PCs are some sort of genetically engineered elite agents created by someone or other. (So... not Action Scientists at all.) They're running a mission in the service of their creators, but upon their return to Taravai Island they're shocked to discover everyone's dead. Everyone, that is, except one of their own, a fellow "experiment" deemed too unstable for field work and scheduled for destruction, now missing and presumed responsible. And the PCs want only one thing: revenge. Bring Me the Head of Dr. Dinosaur. Coming soon to... well, OrcCon, like I said.

After that in 2014? ARRPG's impending release, continued work on Shadow of the Century, my bit for a Tian Xia stretch goal... and who knows, maybe even something that doesn't use Fate! Stranger things have happened. Not to me personally, but y'know. You hear things.
Posted by Mike Olson at 10:37 AM