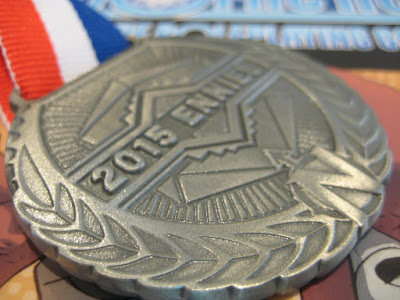 It's been two weeks since Gen Con, and since getting back life's been pretty busy with family stuff (yay), work stuff (yay), and one of my kids going back to school (YAAAAAAAY!!!). I'm rapidly running out of time to crow about this -- arguably, I already have -- but I can't just let it go without comment.

You're probably already aware, but Atomic Robo: The Roleplaying Game won a Silver ENnie for Best Family Game at Gen Con a few weeks ago! I dunno, I think this is pretty cool.

Friends kept telling me Robo was going to win this very ENnie (it was also nominated for Best Game, as you may recall, but the competition there involved D&D, The Strange, Firefly, and Mutant: Year Zero, so we all agreed even Silver was highly unlikely), but I steadfastly went in with zero expectations, so when the award was announced I was genuinely surprised. Not the least of which because there was serious competition in the Family Game category as well -- I wouldn't have been shocked if any of the other nominees had gotten the Silver instead.

I don't know how much sense I made during my brief acceptance speech. I'd been thinking of and rejecting jokes for it for a couple weeks, so fortunately I didn't step onto the stage with a bunch of material that just had to be heard. But I thanked the judges, the voters, Brian Clevinger and Scott Wegener, my wife and kids, everyone on stage with me (Morgan Ellis, Brian Engard, and Sean Nittner, though I honestly thought John Adamus was standing behind me too), and Adam Jury, but I bet I forgot to thank Evil Hat as an entity, or Fred Hicks for bringing me on board as a freelancer in the first place, or others who helped and whom I forgot in the moment. So I'm doing that now. Thanks!

Morgan then told everyone that they oughtta check out Atomic Robo the comic, especially if they want to introduce their kids to comics, then I chimed in to agree, then we got into a brief bit of "Sorry I never told you about Atomic Robo, Mike!" and "Yeah, this guy, he never even told me about Atomic Robo!" and I bet everyone in the audience was like "WTF are these two clowns talking about?" but fortunately we got off the stage right after. Regardless, I'm glad Morgan spoke up.

Then afterwards I went and played an 11:00pm game of D&D. Mike Mearls and Jeremy Crawford were there, so I congratulated them on their many (many, many) wins, and Jeremy says, "Hey, this guy over here" -- here he jerked a thumb in Mearls' direction -- "he's got the Atomic Robo RPG on his shelf at work!" And Mearls says, "Hey, whatta you gotta go and tell him a thing like that for, ya rube!" Then he went to poke Jeremy in the eyes with two fingers, but Jeremy put his hand up in front of his face to block him, so Mearls just slapped him on the back of the head. I dunno, some of that may not have happened -- it was a crazy night -- but the bit about Mearls having a copy of ARRPG in is office is true, that I rememeber for sure.

The next day, when I was back there playing D&D again (I played a lot of D&D at Gen Con...), they both signed my PHB, thusly: 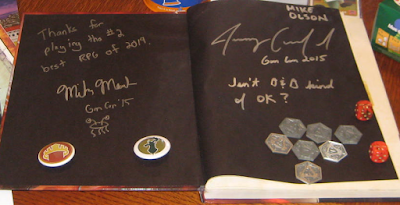 I don't know how well you can read it there, but Mearls wrote "Thanks for playing the #2 best RPG of 2014," implying that ARRPG was the best, which is nice. Then he told Jeremy to write "Atomic Robo is better than D&D," to which Jeremy reacted with genuine doubt. I told him to just write whatever (or just sign his name, which was, y'know, what I thought was going to happen), so he wrote "Isn't D&D kind of OK?" And to think, he was so well-spoken at the ENnies when he accepted all those awards.

What else happened at Gen Con? I ran two fun games of Majestic 12, one off-books game Wednesday night when we were all too tired to see it through, and another Friday morning that had plenty of energy to the end. Oh, and I went to a fantastic baseball game, probably the funnest thing I did all weekend, but I've found that most Gen Con attendees are surprisingly disinterested in minor-league baseball, so I'll just leave that there.

Anyway. No joke, the real honor was that ARRPG was nominated for something at all. The medal's icing on the cake. The most important part to me is that people are playing and liking the game. So if you're one of those people and you voted for Atomic Robo, thanks! If you're one of those people but you didn't vote, then you missed an easy opportunity for me to owe you one. If you don't like Atomic Robo in the first place, you seem to have stumbled upon the wrong blog, but take a look around and maybe you'll see something you like.
Posted by Mike Olson at 4:54 PM