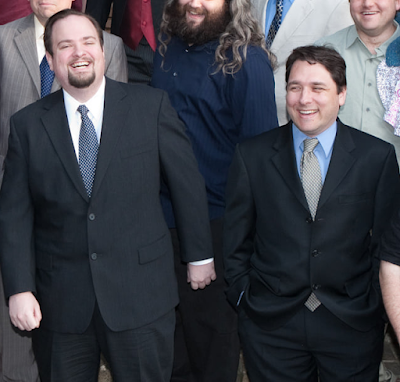 I've been trying to write this for the past 10 days, on and off, so stick with me.

Morgan Ellis, a good friend of mine, died last week unexpectedly. I say "unexpectedly" despite him having been hospitalized since before Christmas, during which time he condition improved and worsened but mostly worsened, because I never, ever expected that it would end like this. It's hard to believe. I know it's real, that he's really gone, but every time I think about what that means for all of us he had to leave behind, my mind recoils.

It's been forever since I posted on this blog, but Morgan has figured fairly prominently in it. We knew each other through conventions, where we'd show off our Fate hacks to each other. I don't think I'd be a professional in the RPG world if it weren't for us encouraging and pushing each other. We'd make plans in advance of Strategicon to align our schedules so each could play in the other's games. Our mutual enthusiasm fed upon itself, in the very best way.

The night I learned he'd died, on a Zoom call with many of our mutual friends, I looked way back in my inbox to find the first emails we'd exchanged, and of course they were bouncing Fate ideas back and forth and asking one another what and when they'd be running a the next convention. It may seem unreasonable that someone I only saw a few times a year could end up being such an important person in my life -- I mean, it's not unreasonable to me, and if you're reading this it probably isn't to you either -- and to be honest I didn't realize just how important he was until I was forced to face a world without him in it. And I've been struggling with that ever since, trying to, if not make sense of it, because it doesn't make sense, then to process it in a way that might improve my life in his absence the way he improved it in his presence.

I think it's this, and it's going to be a little cloying and mawkish, but like I said above, stick with me:

Don't spend your fate points on defense. Save them for being awesome.

This is something Morgan and I said frequently when talking about Fate. Take the stress, take the consequences, whatever -- all of that stuff makes your character more interesting and the game more dramatic. Spending all your resources on protecting yourself makes for a duller game.

It always seemed like Morgan knew everyone in RPGs, especially in indie games. Every convention -- Strategicon, Big Bad Con, Origins, Gen Con, Comic-Con, and plenty of others I've never attended -- he had connections. Whenever it is we get to go back to Origins, it won't be the same without him in the Big Bar on 2. I didn't see him there a whole lot myself, for reasons I'll go into soon, but if I was looking for him and he wasn't at Games on Demand, it was a pretty good bet he'd be there, in a knot of what I'm going to affectionately call "cool kids."

I was not. When I'm at a convention I'm constantly driven by the thought that "I should be playing a game now." I build very little in the way of downtime into my schedule, if I can help it. This means I spend very little time socializing, the thing that, for many people, conventions are all about. I'm like, hey, I didn't fly all the way out here to socialize! I can do that at home!

Except I don't, because at Strategicon, our local convention(s), if there's a hole in my schedule that isn't a meal time, something has gone wrong. I remember the first time I went to Big Bad Con, and all my friends were going out to dinner, and I was like "I think I'm going to stay here in the hotel room and watch Forensic Files."

So what does all this have to do with anything. Okay.

Morgan did not spend his fate points on defense. He spent them on being awesome.

In the days after his death, social media was full of people mourning him, including many who'd never even met him but knew him by reputation. He was a tireless advocate for the things he loved, and he loved a lot of things. He made his connections one table of players at a time, and those people never forgot him afterward. He leaves behind only a handful of published credits, which is a shame because there was no end to his creativity and ingenuity. I'm so glad he was part of the team for Shadow of the Century, because no one on Earth was more qualified to work on a game about the '80s than he was.

Morgan was well-known not so much for what he did, but for who he was. That is the mark of a good life. Far too short, tragically, heart-wrenchingly short, but very, very good.

I will always cherish the memory of the two of us on stage at the ENnies in 2015, accepting an award for Atomic Robo. Two dorks babbling about how great the source material is and how Morgan knew about it for years before I ever got an email from Brian Clevinger. That felt like such an achievement, and I'm so glad he was there to share it with me.

One time he said "We should figure out a game to play together outside of a convention" and I said "Totally!" and then we never did that. We only saw one movie together (at least it was at the New Beverly), despite both of us loving movies. We lived far enough apart that it wasn't easy to get together, and I felt too needed at home on the weekends to work something out. I was spending my fate points on defense.

So as broken-up and broken-down as I am about him being gone, I feel like I knew only a sliver of him. But it's a sharp sliver, and it's deep under my skin. Plenty of people knew him better, but I am still stunned, shocked, shaken.

I don't have a great way to end this, no concluding epiphany. I didn't know how important he was to me until he was gone, and I'll always be grateful he was a part of my life.

Thank you for this Mike. I felt this in my bones because like you I've also shared so many great moments and memories with Morgan, but also there's these large gaps of "damn, I should've spent more of those FATE points!" because there aren't enough Morgan memories in the world.

This is perfect, Mike. It’s not the first time I’ve read it since you published it, and I doubt it’ll be the last. ♥️♥️♥️

eddisonquertermous said...
This comment has been removed by a blog administrator.
February 28, 2022 at 11:48 AM